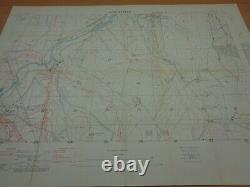 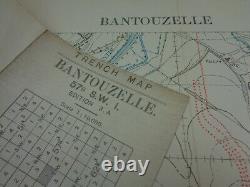 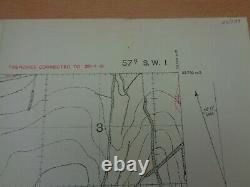 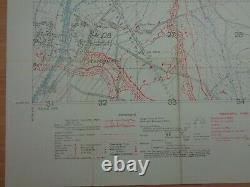 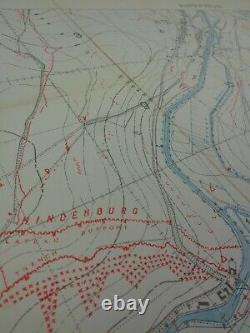 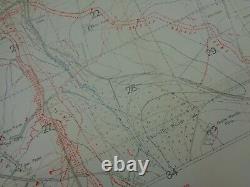 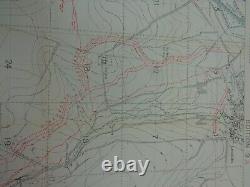 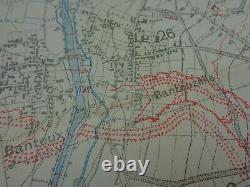 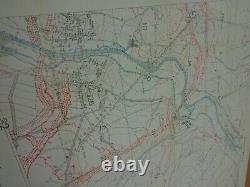 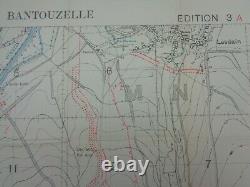 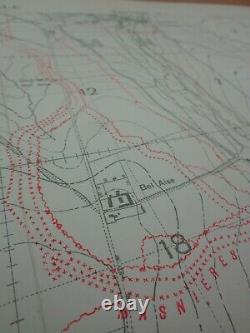 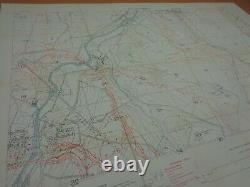 Original WW1 (1918) British INFANTRY TRENCH Map which was produced in the aftermath of The BATTLE of CAMBRAI. Printed on a February 1918 template with trench corrections to 20th January 1918. (The Battle finished in early December 1917). Features a number of strongholds on the Hindenburg (and Hindenburg Support) Line which were captured on the first day of the Battle (20th November).

Covers locations such as the St Quentin Canal, Banteux, Bantouzelle, Bonavis, Vaucelles, Lesdain etc. The area was successfully counterattacked by the Germans hence the absence of any British earthworks. Due to the high scale of 1:10,000, such maps were produced to give a very detailed overview of the terrain and almost exclusively used by the infantry rather than artillery units. Was produced on linen backed paper and is in excellent field used condition as explained below..

Each item was held in the museum's duplicate archives and deemed surplus. Almost all have IWM stock numbers or stamps etc and many have been linen backed for long term conservation and storage purposes. Significant numbers were unused surplus stock when originally transferred to the museum and have never even been folded. As such, many of these original WW1 maps are in'time capsule' condition, and there are numerous'Secret' or'Confidential' maps relating to major battles amongst them. I will be working my way through the collection in due course. This is fully tracked and requires a signature on receipt. International parcels will be fully tracked. PLEASE NOTE - Following BREXIT, some items exported from the UK to EU countries may now incur import tariffs on arrival. This depends on the overall value of the item (or items) contained within the package. With this in mind, please can all buyers from EU countries make themselves aware of how these changes may affect them when purchasing items from the UK. Thank you in advance for your patience and understanding. The item "WW1 (1918) INFANTRY TRENCH Map Post-BATTLE of CAMBRAI Trenches (HINDENBURG LINE)" is in sale since Monday, August 23, 2021. This item is in the category "Collectables\Militaria\World War I (1914-1918)\Documents/ Maps". The seller is "worldwartools" and is located in Ipswich. This item can be shipped worldwide.