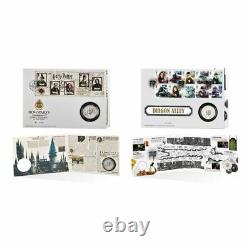 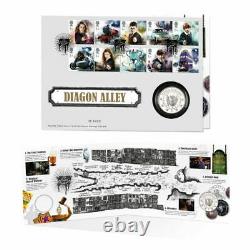 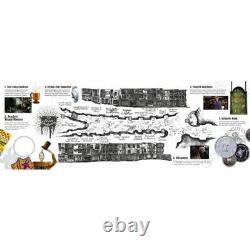 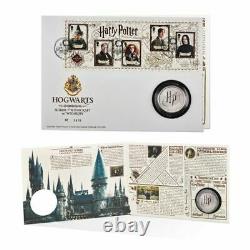 Each is individually numbered and is a limited edition of just 1,000. These atmospheric packs are full of imagery and information about Hogwarts and Diagon Alley.

The Medal Cover dedicated to Hogwarts tells the story of the school as well as key locations within the castle such as the Great Hall and the Grand Staircase. It also contains a feature on the four houses plus a short biography of Professor Albus Dumbledore. The envelope includes the Harry Potter Hogwarts Miniature Sheet featuring five professors from the school on individual stamps, with the Marauder's Map in the background which contains a hidden message revealed when a UV torch is shone on it. The Miniature Sheet has been cancelled with a special postmark comprising an outline of Hogwarts. The Diagon Alley Medal Cover includes a brief description of some of the most famous establishments in Diagon Alley such as Gringotts Bank, the Leaky Cauldron, Flourish & Blotts, Ollivanders and Weasleys' Wizard Wheezes.

It also contains a map of Diagon Alley itself as well as ten Harry Potter Special Stamps featuring amongst others, Hermione, Ron, Neville Longbottom, Ginny Weasley and Harry himself - all cancelled with a special cauldron postmark. The Silver Proof medals are hallmarked (alloy - 925 Ag). Presented in a black clamshell box. This item is in the category "Stamps\Great Britain\Covers". The seller is "imperialmintny" and is located in this country: US. This item can be shipped worldwide.