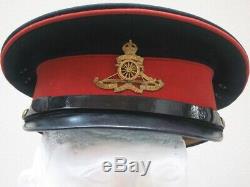 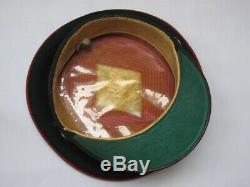 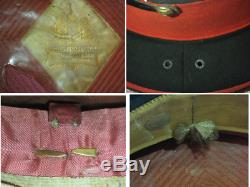 To the front we see Royal Artillery badge early blade fixing, in wonderful condition, leather chin strap still intact and in good working order, still retaining the original Royal Artillery brass buttons to each side, has original vent holes to underside of crown. The outside of the cap is of black finishing with red band and piping and red central band. 100% Original not a copy would grace any collection. In superb condition, has one tiny of moth nip to the top, apart from that fantastic for its age, the cover to the cellulite diamond makers mark inside has a split this is the protective cover and is not seen when the cap is displayed mentioned purely for accuracy most of these covers are actually missing in 90 percent of this caps, please see photos. Maybe a gift for someone special, birthdays.

The item "Post WWI British Officers Royal Artillery Peaked Dress Cap" is in sale since Saturday, March 7, 2020. This item is in the category "Collectables\Militaria\Inter-War (1919-1938)". The seller is "uksilverantiques" and is located in london, London. This item can be shipped worldwide.