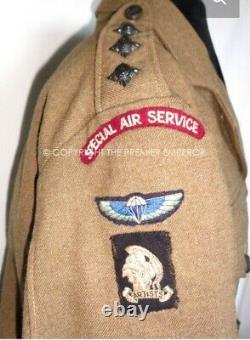 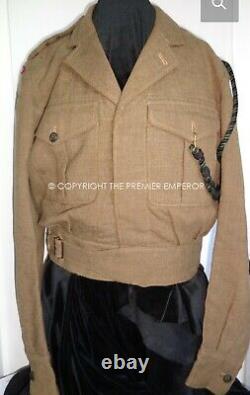 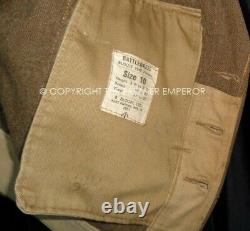 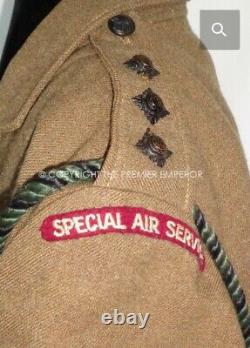 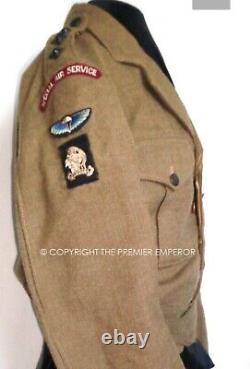 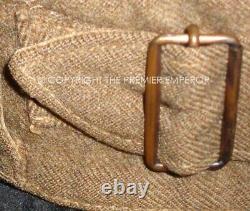 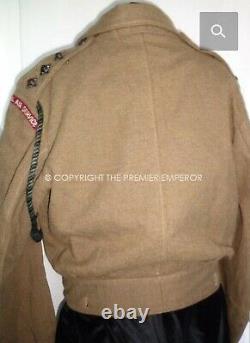 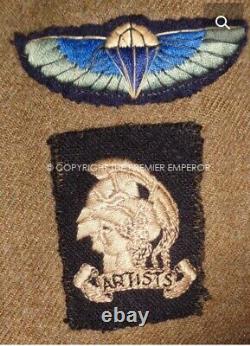 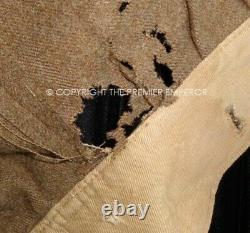 This is a superb 100% original 21st S. (Artists) Officers (Captain) Battledress with all insignia. The battledress is the 1949 pattern with correct label on the inside, manufactured by B.

It does damage on the waist just under the right arm (see listing photographs). This is not visible when displayed correctly because the sleeve covers it. It could be repaired with a piece placing over or behind it and professionally repaired would be a good option, I have left it just as obtained. Rest of the battledress is in good condition.

The two breast pockets have Artists Rifles blackened buttons attached as do the two epaulettes which also have the bronze officer rank pips attached. Artists lanyard is present of green and black twist cord. Both sleeves have the silver/grey on maroon Special Air Service woollen shoulder titles, the right hand sleeve has the SAS wings and also the silver grey on black Artists badge. A superb battledress, extremely desirable and very very difficult to find or obtain. The Artists Rifles is a regiment of the British Army Reserve.

The SAS was disbanded in 1945, but reformed in The Rifle Brigade in January 1947 and transferred to The Army Air Corps in July as the 21st Special Air Service (Artists Rifles)The number 21 SAS was chosen to perpetuate two disbanded wartime regiments, 2 SAS and 1 SAS. The unit was active during the Malayan Emergency and in many subsequent conflicts. In 1952, members of The Artists Rifles who had been involved in special operations in Malaya formed 22 SAS Regiment, the regular special forces regiment at the time, the only time a Territorial Army unit had been used to form a unit in the Regular Army. For much of the Cold War, 21 SASs role was to provide stay-behind parties in the event of a Warsaw Pact invasion of Western Europe, forming alongside 23rd SAS I Corps Corps Patrol Unit. By January 1991, 15 volunteers from 21 and 23 SAS joined more than 300 regular SAS soldiers participating in the Gulf War. In mid-October 2001, members of 21 SAS and 23 SAS deployed to Afghanistan as reinforcements of two squadrons of 22 SAS, for Operation Determine during the 2001 Coalition Invasion of Afghanistan to topple the Taliban regime and destroy and dismantle al-Qaeda in the aftermath of the September 11 attacks. In October 2008, a small team from 21 SAS mentored the Afghan Police in Nad-e Ali. During the Cold War, the Reserve SAS Regiments had a clearly defined and understood role but since then, the requirement for them appears to be less clear and more difficult to articulate. A number of reviews have been conducted over the years and included the prospect of a merger or disbandment, which was considered to be presentationally unpalatable.

A review was conducted of the units operational capability and role in 2009/10; it was found that the SAS Reserve lacked a clearly defined role, and also stated that the reservists lacked the capability, equipment, and skills to serve alongside the regular special forces. As an outcome of this review, on 1 September 2014, 21 SAS was placed alongside 23 SAS and the HAC under the command of 1st Intelligence, Surveillance and Reconnaissance Brigade, a brigade under Force Troops Command which provides combat specialist support to the British Armys Reaction and Adaptable Forces. Can also be collected from our antiques shop in Workington, Cumbria (cash on collection). Feedback says it all really. My descriptions are accurate as possible but please feel free to ask on anything not mentioned or for more pictures.