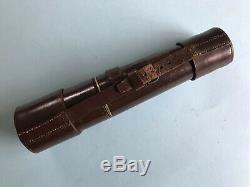 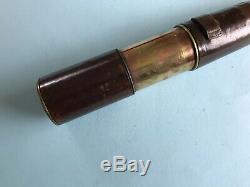 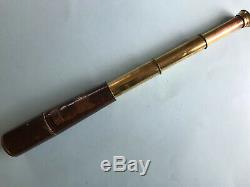 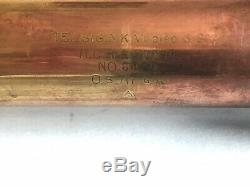 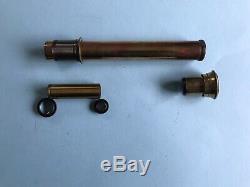 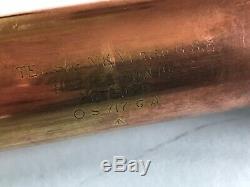 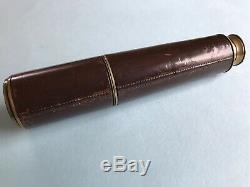 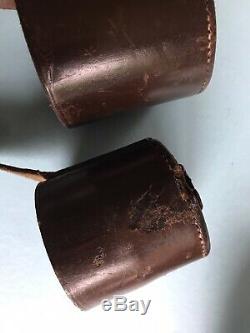 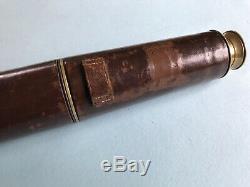 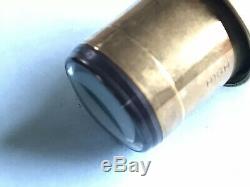 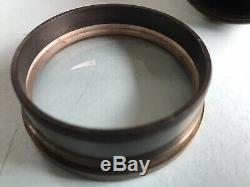 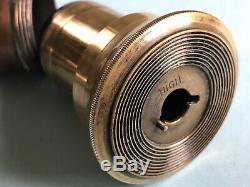 MAKERS' MARKS: (Engraved to the First Draw). Above an upward pointing Military arrow. Three draws retracting into the main brass barrel with a threaded sunshield extension. Both the main barrel and the extending sunshield are leather clad. The 2 Twin components of the Achromatic Objective or Field Lens can easily be unscrewed from their mounts and are separable for cleaning. This lens is in pristine condition with no chips or scratches and has its own leather protective cap. The 4 sunshield slides forward easily to shade the Achromatic Objective Lens. The leather sections are in sound and well polished condition.

Stitching is intact and the caps are secured together by attached leather straps with a central buckle. All tubes are free from splits and move smoothly when retracted or extended.

All 4 lenses in the First Draw are present, intact and clear. Superb overall with excellent focusing and adjustment. Images are of excellent quality as one would expect from such a prestigious maker. The leather cladding to the main barrel and sunshade is in excellent and well-polished condition. All stitching is original and intact. All the leatherwork is fully functional. All lenses are present and intact with no damage whatsoever. All are individually threaded into the cartridges and can easily be unscrewed and removed for cleaning.

There is no shoulder harness present. The lens caps have minor nibbles to the leather.

(Please see scans) The strap linking the lens covers is sound but well-worn. Telescopes of this period were supplied with darkened, anodised tubes so that they did not reflect sunlight when in battlefield use and thereby expose the sniper to detection. The draw tubes on this particular instrument do not seem to have been anodised. If they were, then clearly they must have been cleaned since the brass finish, with some copper showing through, predominates. This may be better for display purposes and certainly makes the makers' details and specifications more easily readable. Fully retracted: 11.25 / 28.7cm. Fully extended: 33.25 / 84.7cm. Fully extended (including the sunshade for the field lens) : 36 / 91.8cm. Sun-shield only: 4 / 10cm. WEIGHT: Telescope fitted end caps and high level lens cartridge: 1.809kg. A fine example of the famous and highly collectable WW2 Mk. Telescopes by one of the principal War Office suppliers. It is in excellent working order, in good condition, and would admirably compliment any period telescope collection. It is a finely machined, excellent quality instrument by this prestigious maker. At the time of its manufacture, it represented the state-of-the-art development of the famous Tel. Telescopes as described in the following brief history. The Mark I telescopes, used in the Second Boer War, were replaced by the Mark II versions in about 1903. A Mark III version followed fairly rapidly but it was discontinued in about 1915 and was not manufactured at all after 1923. The Mark IV versions date from 1914 and became the standard telescopes for most of the First World War. They continued in production well into the 1920s. A complicated but impractical Mk 5 version seems never to have entered service. The Mark VI was not introduced until 1926 - well after the end of the First World War.

Production of it appears to have ceased in 1939 when the lighter Tel. Scout Regiment instruments entered service in 1939.

However, it is interesting to note that a further batch of MK VIs was produced in Belgium in the early 1950s for issue to the Belgian Army. GAND (in a circular mark) / A. MK VI / V6 - OS 717 GA / No. Is an acronym which stands for Optique et Instruments de Precision (Precision Optics and Instruments) - a Belgian company established in Gand (Ghent) immediately after the First World War.

It specialized in the production and repair of military binoculars for the Belgian Army. The two official languages of Belgium are French and Flemish (Dutch).

Telescopes had textured finishes and were equipped with a separate, cased HP Lens. VII / CGB52 GA / R. CANADA / 1944 / No. Many of the World War I Tel.

Series and particularly the Mark IV and Mark VI versions continued in use during the Second World War. Telescopes issued for army use, were equipped with two twin lens cartridges - one for a High magnification (30x) and the other for Low magnification (15x). Whichever lens was not in use was stored in its own leather case and attached to the shoulder harness strap.

Only actual postal costs will be charged. Those shown here purely nominal. And other options may well be available.

All buyers are therefore asked to wait for an Invoice before paying. Please see my other listings for WW1 telescopes and earlier Georgian and Victorian telescopes. The item "POST WW1 / WW2 TEL.

MK VI SNIPING TELESCOPE H. RYLAND & SON # 6029" is in sale since Monday, January 20, 2020. This item is in the category "Collectables\Militaria\World War II (1939-1945)\Field Gear". The seller is "daval-militaria" and is located in Guildford. This item can be shipped worldwide.