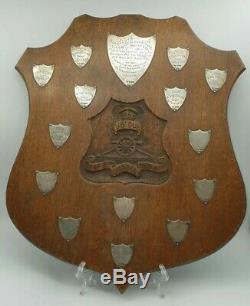 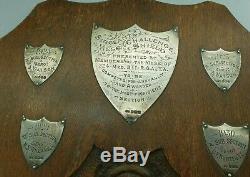 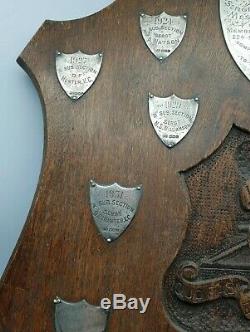 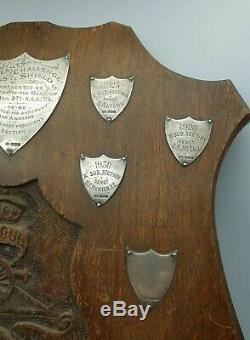 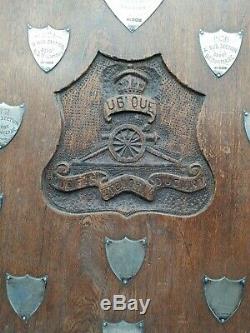 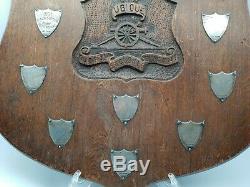 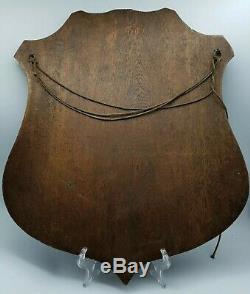 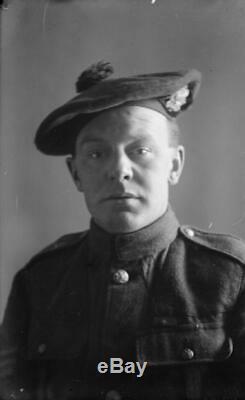 Here's a super opportunity for someone to own an item that wouldn't look out of place in a museum and would most certainly be an excellent addition to any collection! The shield is made from solid oak and has a hand carved RA emblem in the centre.

1930 - A sub section - Sergt- D. 1931 - A sub section - Sergt - D. If you haven't noticed whats really interesting about this plaque, David Ferguson Hunter was awarded the VC during WW1 and won this x3 times! Recipient of the Victoria Cross. The highest and most prestigious award for gallantry in the face of the enemy that can be awarded to British and Commonwealth forces.

Hunter was 26 years old, and a Corporal. In the 1/5th Battalion, The Highland Light Infantry during the First World War. When the following deed took place for which he was awarded the VC on 23 October 1918. On 16/17 September 1918 at Moevoures, France.

Corporal Hunter was detailed to take on an advanced post which was established in shell holes close to the enemy. There was no opportunity for reconnoitring adjacent ground, and the following afternoon Corporal Hunter found that the enemy had established posts all round him, isolating his command. He determined to hold out and despite being exceedingly short of food and water this NCO managed to maintain his position for over 48 hours until a counter-attack relieved him. He repelled frequent enemy attacks and also barrage from our attacks, which came right across his post.

He was subsequently promoted to the rank of Sergeant. He died 14 February 1965. On 12 August 2004, his previously unmarked grave in Dunfermline Cemetery was marked by a memorial stone in a ceremony. Shield measurements: 528 x 448 x 24m. Large silver shield: 105 x 90mm. Smaller silver shields: 45 x 40mm.

I can confirm no research has been conducted on the other gents. Condition report: has some wear, marks and scratches. Feedback says it all really. My descriptions are accurate as possible but please feel free to ask on anything not mentioned or for more pictures. I appreciate that cash can be a issue!