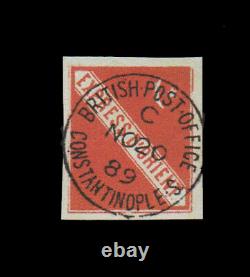 Used, never hinged on yellowish thick paper. On June 5, 1883, the first Express d'Orient left Paris for Vienna. Vienna remained the terminus until October 4, 1883. The train was officially renamed Orient Express in 1891. The original route, which first ran on October 4, 1883, was from Paris, Gare de l'Est, to Giurgiu in Romania via Munich and Vienna.

They then completed their journey to Constantinople by ferry. In 1885, another route began operations, this time reaching Constantinople via rail from Vienna to Belgrade and Ni, carriage to Plovdiv, and rail again to stanbul.

On June 1, 1889, the first direct train to Constantinople left Paris (Gare de l'Est). Istanbul, known as Constantinople until circa 1930 in English, remained its easternmost stop until 19 May 1977. The eastern terminus was the Sirkeci Terminal by the Golden Horn. Ferry service from piers next to the terminal would take passengers across the Bosphorus to Haydarpaa Terminal, the terminus of the Asian lines of the Ottoman Railways. The onset of the First World War in 1914 saw Orient Express services suspended.

They resumed at the end of hostilities in 1918, and in 1919 the opening of the Simplon Tunnel allowed the introduction of a more southerly route via Milan, Venice, and Trieste. The service on this route was known as the Simplon Orient Express, and it ran in addition to continuing services on the old route. The Treaty of Saint-Germain contained a clause requiring Austria to accept this train: formerly, Austria allowed international services to pass through Austrian territory (which included Trieste at the time) only if they ran via Vienna.

The Simplon Orient Express soon became the most important rail route between Paris and stanbul. Please study the scans carefully.

This item is in the category "Stamps\Great Britain\Regional Issues\Other Regional Issues". The seller is "vvtesla" and is located in Pakrac. This item can be shipped worldwide.