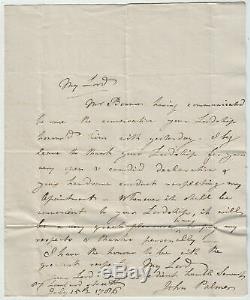 Surveyor and Comptroller General of the Mails. The original Autograph Letter Signed John Palmer, to the Postmaster General, the Earl of Tankerville, thanking him after hearing the news from Mr. Bonnor for your very open & candid declaration & your handsome conduct respecting my Apointment [as Controller General of the Post Office], hoping to pay his respects & thanks personally. 1 page 8 x 7 inches, with the integral blank leaf, fine clean condition, folds. 87 Lombard Street, 15 July 1786. A rare autograph on a significant letter in the history of the Post Office.

His correspondent, Charles, 4th Earl of Tankerville, Postmaster General, became a victim of convoluted Post Office politics and was forced to resign in August 1786. In the same month Palmers appointment and salary were confirmed by Pitt at the Treasury. On 11 October 1786 the Board appointed Palmer Surveyor and Comptroller General of the Mails. Difficulties later arose because Palmer was technically under the Postmaster General while remaining free to carry out his reforms. For the background to his official appointment, see Kenneth Ellis, The Post Office in the Eighteenth Century (1958), pp.

This item is in the category "Stamps\Great Britain\Postal History". The seller is "autographic" and is located in London. This item can be shipped worldwide.